Freedom, where does it end?

The President of the United States of America (not the awesome music group) many times is referred to as “The Leader Of The Free World.” Where do we get this idea from? The Free World. What are we freed from?  What are we now free to do?  Somewhere in the corner of your mind, I hope you realize the question is to you individually.  If you don’t get to exercise freedom in your own specific life, is it really worth anything? 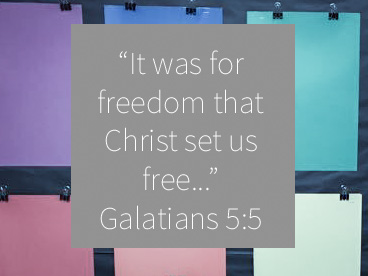 A place to start to understand freedom is in the letter Paul wrote to Gaelic people in Asia Minor.

Galatians 5:5:  "It was for freedom that Christ set us free; therefore keep standing firm and do not be subject again to a yoke of slavery."

In Paul’s letter, he is calling us to be free from disobedience to God our Father.  The yoke of slavery is sin.  You and I are now free to obey by placing our faith in Jesus.  But, there is more to this, if you think about it.  Paul is also describing freedom from family traditions or cultural obligations.  We live in a culture today where those things aren’t a big deal.  However, pre-modern human society was built upon the idea of tribal identity.  The tribe (your family essentially) lived life one way, which meant everyone lived a life that way.  You weren’t free to choose for yourself.  If your tribe attacked another tribe to get revenge, then you attacked.  You didn’t get to choose what you wanted to do or think about how to achieve true justice.

The Hebrews in the Jewish Scriptures grew up with this same mindset, but even then God was teaching them more than 2500 years ago that He deals with mainly individuals and not groups.

Ezekiel 18: 14: "Now behold, he has a son who has observed all his father’s sins which he committed, and observing does not do likewise. 15 He does not eat at the mountain shrines or lift up his eyes to the idols of the house of Israel, or defile his neighbor’s wife, 16 or oppress anyone, or retain a pledge, or commit robbery, but he gives his bread to the hungry and covers the naked with clothing, 17 he keeps his hand from the poor, does not take interest or increase, but executes My ordinances, and walks in My statutes; he will not die for his father’s iniquity, he will surely live. 18 As for his father, because he practiced extortion, robbed his brother and did what was not good among his people, behold, he will die for his iniquity. 19 “Yet you say, ‘Why should the son not bear the punishment for the father’s iniquity?’ When the son has practiced justice and righteousness and has observed all My statutes and done them, he shall surely live.20 The person who sins will die. The son will not bear the punishment for the father’s iniquity, nor will the father bear the punishment for the son’s iniquity; the righteousness of the righteous will be upon himself, and the wickedness of the wicked will be upon himself."

It should be clear from what God tells Ezekiel that He is confronting, though of secondary importance, the idea of tribal identity.  Individuals are guilty or innocent before Him, not groups. You don’t have to suffer for what someone else does, but you won’t be blessed for someone else’s actions.  That was a revolutionary idea in the ancient world where pagan religions focused on tribal guilt and atonement.  You can even read where the Israelites push back on this concept in verse 19.

The idea of personal forgiveness before God or personal judgment seen throughout the Bible is the philosophical basis for what we call individualism.  If God deals with individuals, then we should deal with other people as individuals.  From the same letter of Paul as before, he makes that perfectly clear.

The group identity is stripped off of each individual in the passage above, and as a result, it is seen that each person has equal value and is unified in their humanity alone.  This idea for hundreds of years has worked its way through twists and turns into the Church and Western culture.  Progress has been slow and inconsistent, but the American values we have today go back to the gospel you see in Galatians 3:26-29.  We know not to discriminate on the basis of race, gender, education level, religious practice, and political affiliation.  We say things like “you do you” because we celebrate individualism.  Looking back, we can see how individualism played a role in the development of the Renaissance, the Protestant Reformation, the Enlightenment, Scientific Method, the Industrial Revolution, the Columbian exchange, and Democracy.

To be sure, we, as fallen people, can misuse individualism to our harm.  Still, the exciting world we live in today is based on personal freedom, which starts with God personally freeing us from sin through the gospel of His Son Jesus.

The Ethics Of Capitalism

Are we living in difficult times?